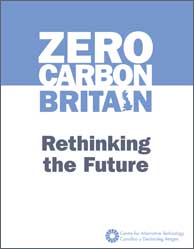 The latest report, Zero Carbon Britain: Rethinking the Future , highlights two key areas: “keeping the lights on’ with a variable renewable energy supply, and ‘feeding ourselves properly’ on a low carbon diet”. CISE has contributed to the discussion paper series ‘ZCB and…’ , with an article ZCB and Community Energy: Models of a Zero Carbon Future.  In this article we outline some of the challenges and opportunities community energy projects face in the UK. For example issues such as organising finance, filling in planning applications and getting the right people with the right skills to work together can be crucial for the success of community energy. What is impressive about these projects is that they are often run by people with great enthusiasm and drive to make positive things happen in their neighbourhoods. These community groups form an integral part of a Zero Carbon Britain and we can all learn from them.

The ZCB project was launched in 2006 and has published three reports on decarbonisation scenarios. The ZCB reports involve several phases of research from academic and industry organisations, which contribute ideas on how Britain could become zero carbon. The first report, zerocarbonbritain: An Alternative Energy Strategy , was published in 2007 and outlined a pathway to zero emissions in 20 years with proven technologies. The second report, ZeroCarbonBritain2030: A New Energy Strategy , was published three years later in 2010 and took a broader vision, including the economic and employment benefits of zero carbon buildings, energy, food, land use and transport.

and the Zero Carbon Britain: Rethinking the Future report